World Champion, Oluwatobiloba Amusan sheds tears of joy as the Nigerian anthem is played to celebrate her Gold medal in the 100m hurdles at the World Athletics Championships in Eugene, Oregon, USA

Tobi Amusan became the first Nigerian ever to win gold at the World Athletics Championships after racing to a stunning world record time of 12.06s.

It was the second time Amusan would break the record on the night, improving on her 12.12s in the semi-final. It was previously set by America’s Kendra Harrison’s at 12.20s.

On a night of many firsts, Amusan became the first Nigerian athlete to ever set a World Record in any event. It will also be the first time the Nigerian anthem would be played over the public address system during medal presentation as the winner of an event. 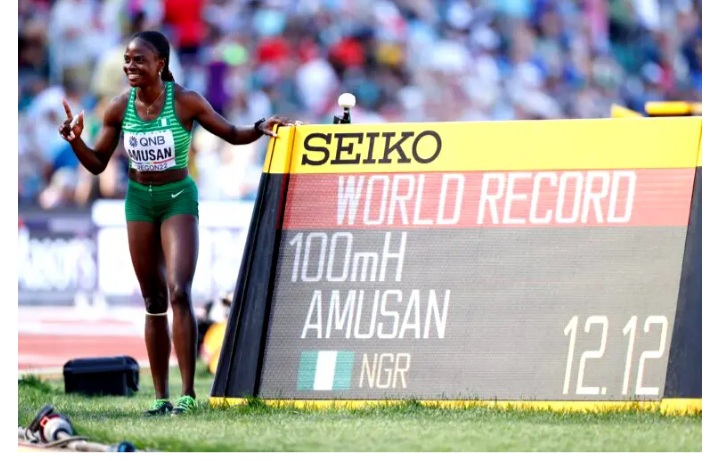 Amusan’s victory, will for her, be some sort of compensation for a disappointing outing in Tokyo last year where she finished fourth in the final despite being touted to take one of the medals.

She walks away with a $100,000 prize money and will now turn her attention to the Commonwealth Games beginning on Thursday, July 28 where she’s also the defending champion in the event.

Congratulations 👏 Champion  🏆 We are proud of you.