The Lagos Government on Wednesday announced an ‘indefinite and total’ ban on the operations of commercial motorcyclists, popularly called Okada riders in six local government areas of the state. 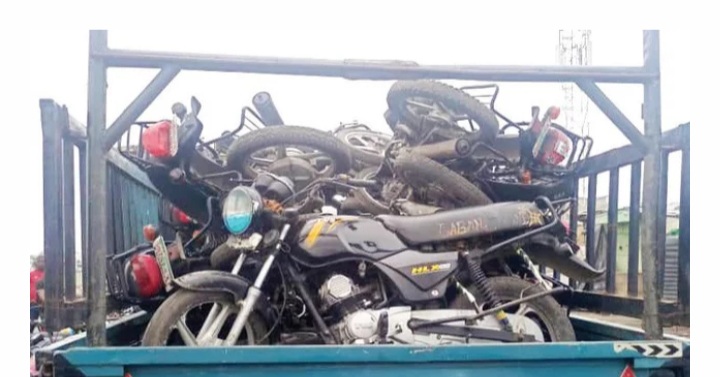 Babajide Sanwo-Olu, governor of Lagos, gave the directive during a meeting with the state’s security agents.

However, SaharaReporters observed that the Lagos State Government had several times announced a ban on this means of transportation without success.

The government on these occasions attributed the ban on Okada to the increasing rate of criminality which is perpetrated through the use of motorcycles. However, this had been met with stiff resistance by motorcyclists who complain that their source of livelihood would be adversely affected.

Also, the motorcyclists’ disobedience is encouraged by some section of the population who lament the stress they endure due to such bans amid the inadequate means of public transportation in Lagos.

Meanwhile, it can be said that the state government had failed in the implementation of the Okada ban despite a law that stops the activities of the operators on some highways.

The Lagos State Traffic Law 2012 prohibits the operations of Okada and tricycles, also known as Keke Marwa, from operating in certain routes and areas across the state.

Meanwhile, this law only restricted motorcycles or tricycles with engine capacities below 200cc from operating on major expressways and highways. It also stipulated that motorcycles used for mail distribution or courier services should have a minimum engine capacity of 200cc.

tricycles with engine capacities below 200cc from operating on major expressways and highways. It also stipulated that motorcycles used for mail distribution or courier services should have a minimum engine capacity of 200cc.

Section 46 (1) of the Law stipulates that ‘no person shall ride, drive or propel a motorcycle or tricycle on a major highway within the state, and any person in contravention of this provision commits an offence liable on conviction to imprisonment for a term of three (3) years with such motorcycle or tricycle forfeited to the State’.

However, the law had been largely flouted. Below are the number of times the state government pronounced a ban on Okada in the state.

In 2006, the Bola Tinubu government announced a restriction on the operating hours of Okada riders as it banned them from operating between 7 pm and 6 am every day.

The Lagos State Government in 2012 under the Babatunde Fashola Administration placed a total ban on the operations of commercial motorcycles in the Ikeja axis of the state.

The ban was followed by a directive to the police to arrest any rider found operating on major roads in Ikeja.

2017
Also in 2017 under Akinwunmi Ambode’s administration, the Lagos State Government again announced a ban on Okada activities on major highways, bridges and roads.
It listed hundreds of routes where motorcycles and tricycles ​(aka Okada and Keke) ​had been banned​.
The list included major highways, bridges​, etc. in Lagos.

The government also banned Okada and tricycles from plying 40 bridges and flyovers across the state.

At the time, bike-hailing services such as Max, Gokada and Opay were in operation across major highways in the state. These were also later banned as they were affected by the Okada ban. However, dispatch riders, food delivery riders and other logistics players like GIG logistics, Domino’s Pizza, and Max Delivery, were allowed to remain in operation.

SaharaReporters observed that each time these bans were announced, the Lagos State Task Force set into action, impounding several motorbikes and tricycles.

However, the enforcement was usually short-lived as many motorcycles and tricycles returned to the previously restricted areas, particularly the highways as the demands for them increased

According to Sahara Reporters

What is your take on this Okada ban?