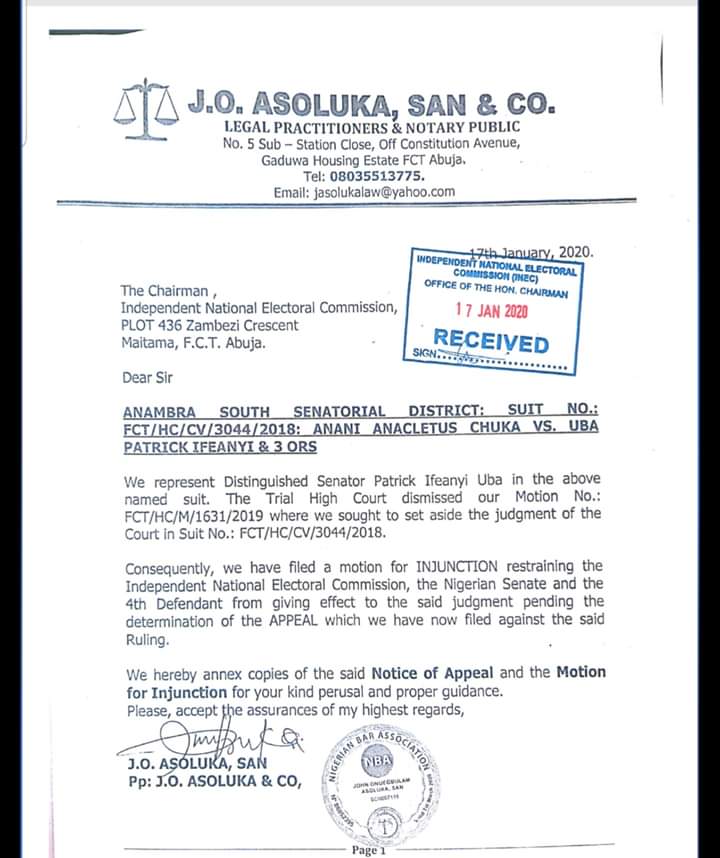 “The reports of my sacking from the Senate is not correct. I remain the substantive Senator representing Anambra South.”
Dr Patrick ifeanyi Ubah.

Sequel to the FCT High Court ruling on the Anambra South Senatorial Election, our attention has been drawn to the misleading reports of the Court ruling making rounds in the Media sphere. For the records and purpose of clarity, we find it expeditious to categorically state that:

1. As provided in the Electoral Act, the FCT High Court has no jurisdiction as the matter in question is a post-election matter which only the Election Tribunal has the jurisdiction to hear and determine. It is pertinent to state here that Obinna Uzoh never filed any claim or counter claim and was at all material time, only a defendant in the claim filed by one Anani Cletus, a known crony of Obinna Uzoh who hails from Ihiala and is an impostor who is not known to YPP. It has also been found that Anani Cletus is Obinna Uzoh’s hatchet man. Interestingly, they also share the same address.

2. The crux of the matter is that; Obinna Uzoh, through a motion for joinder, sought the leave of the Court to become a party to the suit as a Defendant in a pre-election matter filed by Anani Cletus on the 27th of March 2019 (a month after the Senatorial election was conducted), wherein Senator (Dr.) Ifeanyi Ubah was declared the winner and Chris Uba of PDP, the 1st runner-up. While he, Obinna Uzoh, filed his application for joinder on the 27th of March 2019, the same application was heard on the 28th of March, 2019 without serving or allowing Senator (Dr.) Ifeanyi Ubah who is the defendant, the stipulated 7 days provided by the rules of the Court to oppose or concede to the application.

3. This action by the Court was in breach of Senator Ubah’s right to fair hearing as guaranteed by Section 36 of the Nigerian Constitution, as amended, and the FCT High Court civil procedure rules. The Court in a ruling delivered on the 1st of April 2019, joined Obinna Uzoh without Senator Ubah being served processes and hearing notices by the court as shown in the proofs of service in the Court’s file. In essence, the filing, hearing, ruling of the application for joinder of Obinna Uzoh was done within five (5) days without Senator Ubah’s presence and that of his party, YPP. These underarm tactics applied by Obinna Uzoh and approved by the Court against Senator Ifeanyi Ubah offends all notions of fairness, justice and fair play.

4. The FCT High Court has no territorial jurisdiction to hear the matter as the matter and course of action arose from the Anambra South Senatorial Primary election of the Young Progressives Party (YPP). As such, the FCT High Court lacks the territorial jurisdiction to hear the matter. The mischief of filing and joining the case in Abuja as against Anambra state was to ensure that the Defendant and even Chris Uba, the candidate of the PDP were not aware of the proceedings. Infact, Chris Uba filed an application asking the court to be joined in the matter as he is the authentic candidate of the PDP as confirmed and published by INEC. Again, the Judge struck out his motion for joinder out.

5. Obinna Uzoh was not a claimant or counterclaimant in the matter. Despite this fact, the judge went ahead to grant him reliefs sought in his lawyer’s final written address; an action that is contrary to the provisions of the Law which says that the court cannot grant a person or party reliefs not sought and a defendant cannot have reliefs before a court unless he/she is also a counter claimant as the court is not a Father Christmas.

6. The Court declared Obinna Uzoh as the winner of the election contrary to Section 285(13) of the 1999 Nigerian Constitution, 4th alteration, as amended, which provides that the Court cannot declare any person who did not participate in all the stages of an election as the winner. Obinna Uzoh did not participate in the elections as it was Chris Uba that participated under the platform of the PDP and was duly announced by INEC as the 1st runner up.

8. The Court also has no jurisdiction to grant any relief in the claim after finding out that the claims of the claimant (Anani Cletus) have been overtaken by events according to the judgments of the Court. At that point, the pre-election matter filed by Anani Cletus came to an end. Curiously, rather than strike out the suit, the Court proceeded to consider the post-election reliefs sought by Obinna Uzoh’s lawyers in their final written address in opposition to the claim of Anani Cletus. This approach is unheard of in Nigeria’s legal jurisprudence as written addresses of Counsels are mere legal arguments and not claims.

9. The Court also lacks jurisdiction to make far reaching findings, some of which border on illegality and are contentious as an originating summons was used to commence the suit. Such a suit must be commenced by a writ of summons to allow Senator Ifeanyi Ubah call witnesses to testify and rebut the unfounded and malicious allegations made against him. This cannot be done by an affidavit but only by oral evidence as stated by Nigerian law and Judicial decisions.

10. The Court did not rely on any information from NECO, did not summon any staff of NECO, neither was there any official document from NECO stating that Senator Ubah’s NECO certificate was forged. As such, there was no iota of proof before the Court, let alone proof beyond reasonable doubt on the allegation of falsification of NECO certificate. The Court by virtue of this action, yet again, denied Senator Ubah of his right to fair hearing and impartial determination of allegations against him.

11. It is also imperative to note that Senator Ubah was not served with any of the Court processes and the endorsements and returns in the Court’s files confirm this. The motion joining Obinna Uzoh, hearing notices, and even the judgment were not served on Senator Ifeanyi Ubah. Obinna Uzoh and Anani Cletus hid the judgment from April 2019 when it was delivered and did not take any step to bring the judgment before the election tribunal or Court of Appeal where Senator Ubah’s victory was reaffirmed by the Election tribunal and Court of Appeal. This kangaroo tactics adopted spell doom for our electoral process and the entire justice system if allowed to stand.

12. All these points and more, including the criminal nature of the allegation were presented to the Court during the hearing of Senator Ubah’s application to set aside the earlier judgment on the ground that it was a nullity. However, the Court surprisingly and yet again, denied Senator Ubah his right to fair hearing by refusing to go into any of the issues raised by his lawyers but only held that his application to set aside the null judgment of the Court was statute barred on the basis that the 180 days for pre-election matters had elapsed.

13. The Court also failed to consider the recent Supreme Court decision in Appeal No. SC/1384/19 between Uche Nwosu vs Action Peoples Party, which his lawyers tendered to the Court in respect to the objections raised by Obinna Uzoh’s lawyer; where the Supreme Court held that the limitation of time will not affect, void and null void action. The Court failed to appreciate our arguments that the reliefs sought by Obinna Uzoh’s lawyer in his written address were filed after the election and was therefore a post-election matter to which the 180 days time limit would not even apply. Again, on service, the Court did not provide any basis for its position that Senator Ubah was served.

14. The reliefs granted on the 11th of April, 2019 were based on post-election matters. Furthermore, the reliefs being sought for, after the election was conducted, is contrary to Section 285(1) and Section 285(9) of the 1999 Constitution, as amended.

15. Finally, Senator Ubah has appealed against the Judge’s refusal to set aside the judgment of 11th April, 2019 granted to a co-defendant and also filed a motion for injunction to stay the judgment of the FCT High Court (Bwari division), pending the determination of the Appeal at the Appellate Court. All relevant parties including INEC have been served. We have absolute confidence that justice will be served by the Court of Appeal.

17. We wish to use this medium to appeal to all well-wishers and supporters of Senator Ifeanyi Ubah to remain calm as justice will certainly prevail. Justice delayed is not justice denied.